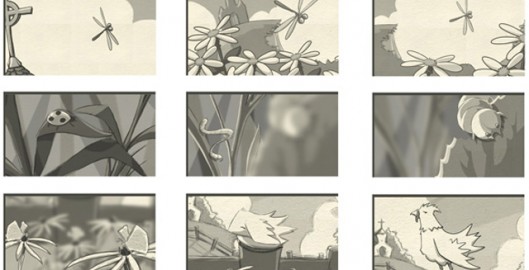 So this is how the film opens.   We follow the dragonfly as he makes his way around the cathedral steeple and down into the lush pastures filled with wild flowers and rich with insect life. We finally settle at the base of a fence post and slowly raise the camera to find a rooster just getting ready for his morning crow to wake the countryside.

To see the full page of story panels in a larger image click here.

END_OF_DOCUMENT_TOKEN_TO_BE_REPLACED

Here’s a short storyboard sequence that I like a lot.  Michael Spooner suggested we go for a silhouette on this shot and it really stands out.  It gives a nice break from the otherwise thick atmosphere of the room.

Click on the detail below to see the full image.

So this is the space Br. Thomas walks through every day on his way to work.  If you can’t tell from the images (but I hope you can) he feels a little out of place in such a beautiful and austere environment.

The challenge for me in these boards has been to establish a somber tone to the scene and create an almost overwhelming expansiveness to the space.  I really want Br. Thomas to feel small and insignificant in the shear weight of all the beauty, history and religiosity.  Light and shadow have a lot to do with this as well.  The church fathers are merely stone monuments but for Thomas the long shadows they cast only serve to increase his already heightened sense of not belonging.