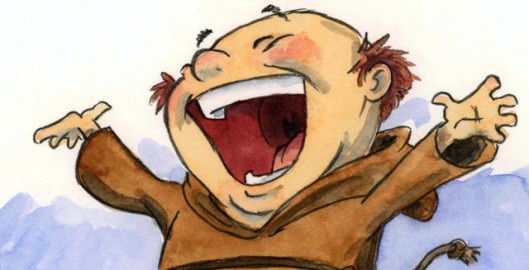 Tim Hodge and I worked together at Big Idea Productions back in the early 2000’s.  As one of the first artists to migrate to the Mid-West from Disney Studios Tim brought a wealth of story and production insight that could only have come from a major studio.

Tim’s Veggietale directorial debut was Lyle the Kindly Viking which to this day stands out as one of my favorites in the series. . . what’s not to like about an asparagus viking knitting pot-holders. 🙂

I love what Tim has done with Br. Thomas.  Somewhere between religious ecstasy and winning the Irish lottery! 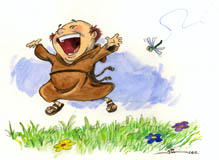 Tim Hodge has over 20 years in the animation industry. Starting in commercial production, he eventually moved into feature animation at Walt Disney where he worked on such films as “The Lion King” and “Pocahontas”, moving into the story department for the films “Mulan” and “Brother Bear”.  In 2000, Tim moved to the independent studio, Big Idea Productions, where he wrote and directed for the award winning video series, VeggieTales. Tim was lead storyboard artist on both of Big Idea’s feature films.

Tim was also the Executive Producer of the TV series “3-2-1 Penguins!” appearing on NBC.